When it comes to history, there's no shortage of it in Gulgong

Gulgong is a 19th-century gold rush town in the Central Tablelands of NSW, Australia.

The Wiradjuri Aboriginal people were the first occupants of  the area. The Wiradjuri word “gulgong” means “deep waterhole”.

Walking around the narrow streets of Gulgong you will feel like you have stepped back in time with many beautiful buildings lovingly preserved.

Visit the Gulgong Holtermann Museum to view photos of Gulgong during the Gold Rush period or the Gulgong Pioneers Museum where there are many displays from the town and surrounding area’s rich history. 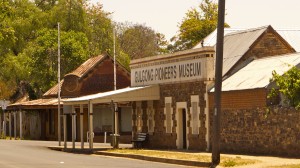